Who is getting brave then?

Today I got out in the single scull again, and set out feeling a little bit brave. As I've done a fair amount of sculling of late I thought perhaps I would give a few new things a try. The river was fairly quiet, but the crews that were out were mostly coxless and the sun was unexpectedly bright. Having gotten there nice and early, I just got on with getting the boat out, and set it up swiftly. One of the things I was determined to try was moving off from the racing start position. 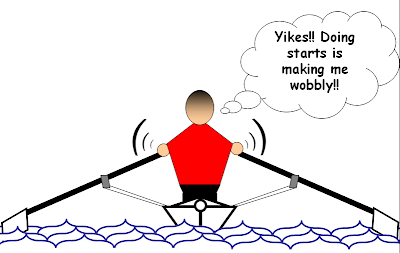 I did manage it a couple of times, but as my Cartoon sculler demonstrates I wasn't entirely comfortable. The last time I did it was just before I heading to the landing stage at the end of my session - I figure if I fell in it wouldn't be far to swim. Happily it went well, though a watcher on the stage pointed out I was doing strange things with my left oar.

One other thing I tried during my three trip excursion was a 'race piece' over 500m, from above the bridge to the end of the landing stage by the web cam. I wasn't looking for anything earth shattering, but really just a benchmark for future reference. In the end I did it in 2 min flat, and though not amazing or all that smooth I was pretty happy with it.
Posted by Taffi at 8:22 pm
Email ThisBlogThis!Share to TwitterShare to FacebookShare to Pinterest