Wittering on Wednesday - 'that guy'

Well as a sports fan I was drawn into watching the interview where a sportsman did his level best to distance himself from, well in the end from, himself. It was almost as if Lance Armstrong was trying to convince the audience that there were 'forces and pressures' that made him do things and that he was not true to his current self, but a victim of a whirlwind of circumstance that he could do nothing about. Well in a nutshell, I was not at all convinced, I was not convinced at all... you can always say 'no'.

There are so many issues surrounding the 'confession' that a debunking of it all would take hours, and from where I sit as a general sports fan it is all just deeply sad. I myself was wow'ed by the sport of road cycling during his run of Tour de France wins, I would leave work early with a very good friend to sit in his lounge wrapped in the wonder of watching 'that guy' storm up an alpine col. It was incredible to watch the drama of those races unfold, and frankly though I will still watch the Tour or other events I feel robbed of something. I watched the cancer survivor apparently defy the odds and blow the world away, it was inspiring and I feel very hollow at the final analysis.

I know that I was not alone in that sinking feeling over the last years leading into this admission, and the bereft feeling now we know the accusations were true. I bought the wristbands for the charity, when I might have spent that money on another charity, because of the feats of the man. Why else would I donate to a charity based halfway around the world (yes, I am very aware they fund global research). I am also the owner of a Nike / Livestrong running jacket that is frankly brilliantly stunning at its job, but lately has made me think twice about going for a run in it.

It is absolutely crazy to take something of this nature personally, but here I don't think I am alone in doing so either. Following heroes and icons has always been a risky enterprise.

At the moment I hope that 'that man' both from the past and present goes on to confess more fully in a more appropriate forum (law courts, some form of court of arbitration for sport clean-up commission). That there is still so much not laid out for further actions to be based upon in cycling and sports around doping is wrong, and 'that man' has not forgotten the machinery that got him around the Tour de France as 'winner' seven times.

Sadly my personal opinion is that sport should not allow Armstrong into any arena even if the total confession is given, it has been the manner and conduct of not wishing to be truly accountable for his own actions that leave me with little doubt a lifetime ban is merited. A truly humbled, repentant, sorry individual would not on balance carry on business in this way, and would likely be granted some form of sporting outlet in the future.

So there, I couldn't bite my insignificant sports fan tongue any longer. Sadly I will likely now be using the story of Lance Armstrong as a story of the bleak side of sports to my kids rather than the story of effort that many of believed not so very long ago.
Posted by Taffi at 12:18 pm 0 comments
Email ThisBlogThis!Share to TwitterShare to FacebookShare to Pinterest

So I arrive at the second Monday of January very much in motion. I have successfully turned around a bunch of bad habits that I acquired towards the back end of 2012, where I came down with flu and spent a month comfort eating myself in the wrong direction. I am some way to shifting the weight that I 'gained' during the illness and the festive season (though to be fair to myself the festive season was pretty restrained by my own previous standards).

On the move again is feeling great and each day the chest infection, that has had a hold on my lungs since just before New Years, is loosening its grip. All being very well I will be able to run this weekend rather than power walk. Not having run for so long leaves me curious as to just how much it will hurt and just where it will hurt - my feet, my legs, my shoulders, or simply my lungs from lack of proper usage.

The plan for my the first marathon of the 2013 'season' is still evolving, and I am refraining from putting anything in actual stone (i.e. sharing it) until I have a couple of runs under my shoes :-)

Diary - cold, sunny, dry. Grateful for being able to get busy again and enjoying the start of the journey back to fitness.
Posted by Taffi at 2:34 pm 0 comments
Email ThisBlogThis!Share to TwitterShare to FacebookShare to Pinterest

So this week has been the first full week of the year, and already things are in full swing. I am still suffering a chest infection / cold, but have been busy getting properly 'on the move' again. With my eyes firmly fixed on the major challenge of the spring / summer, the Milton Keynes marathon, I have put a plan into action. The plan as it stands comprises to parts, firstly to just get busy (increasing daily activity by walking / cycling to work, doing some Wii fit / fitness DVDs when I have spare moments) and get healthy (eat right, eat smart, eat fresh), and the second part is to move into a 16 week training program for the marathon.

I have not felt it has been a sensible idea run, but have covered a lot of miles walking instead so that at least my body gets used to time in motion and my joints get the idea of carrying me over longer distances again. Sounds a bit melodramatic I suppose, but that is simply where I am - and really these alternatives to actually running are all about not getting sick again. For example, if I just hit the roads with the chest infection I fear to will lead me back to acute bronchitis / walking pneumonia, which would lay me up for weeks.

Essentially my 'base' phase is starting very tentatively and with as much 'protection' incorporated as possible (stretching, aerobic work, diet, & simple incremental activity increases). I hope to run for the first time in this training plan next week, week 3 of the plan, but at the moment I am relaxed about how I have moved through the first two weeks.

Diary - cold, dry, icy under foot. I have lost 5lbs in two weeks, so good progress into the New Year. Grateful that I am busy and productive already in 2013, with so much to make and do this year.
Posted by Taffi at 10:47 am 0 comments
Email ThisBlogThis!Share to TwitterShare to FacebookShare to Pinterest

Monday Motivation - A plan? A plan? Well a series of goals at least

Do I have a plan? A plan? Well I do have a series of goals at least for the moment around which plans are beginning to crystallise.

For the time being here are my goals for the year ahead...

(Okay so the last one is strictly out of my total control, but I will do all I physically can to make it happen).

I know a kind of sporting bucket list for 2013 is hardly novel, and my list was inspired by reading some of the blogs I follow. The truth is I am recognising that without goals I find it tricky to get myself out running on a cold wet British Winters day - let alone summers day, hehe!

Diary - clear, mild, dry (though still wet under foot). Went for two long walks over the weekend in lieu of a run because I have a chesty cough at the moment and didn't want to stress my lungs. Generally I am on track with all things fitness again and will be running just as soon as this cough goes. Grateful for a busy but fun family Christmas and New Years.

Posted by Taffi at 10:05 am 0 comments
Email ThisBlogThis!Share to TwitterShare to FacebookShare to Pinterest

...the weirdest bit of health advice I think I read during all of last year was to get a smaller cup / glass for your desk (office or home).

The idea being that you then find you have to make more frequent trips to the water cooler / kitchen to top-up and refresh your cup, and that in so doing you make yourself more mobile through the day, you break off from screen starring more often giving your eyes a rest from eye-strain, and that it leads to a greater probability of interacting with people you work with by becoming more social, also perhaps even burn more calories through the work week.

I think it was from an office based tips list that I stumbled across online - though I sadly don't remember the source of this simple sage advice. Now because as I said I don't remember the specific source of this nugget I can't remember what they were pushing as the prime reason to get a smaller cup - I fear it may have been the calories thing, but I'm going to use rose tinted hindsight and suggest that mobility and stretching during your day helps keep you loose and active.

Whatever the case I found it it is useful and actually seems to be having an effect in as far as I end the day less stiff, tired and knotted from desk working.

Give it a try - "from small things big things one day come...", and all that :-)
Posted by Taffi at 11:54 am 0 comments
Email ThisBlogThis!Share to TwitterShare to FacebookShare to Pinterest

So I have racked up over two years now of being caffeine-free (with the exception of two running events where I 'used' it to see if it would directly benefit my running). To say giving up was easy would in all actuality be the truth, the hardest aspect over time has been having to keep reminding family and friends that I don't want coffee / tea.

Somewhere in a cupboard in our house a teapot mourns it's loss.... 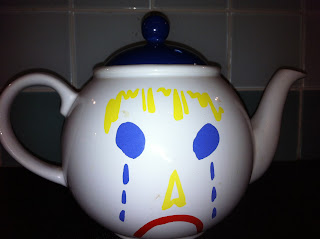 ....happily it still gets outings when we have visitors or if my wife is hitting the tea hard because of heavy work load.

Would I recommend going 'clean' - well "yes", but I won't get on my soapbox (afterall I have done that before - "Caffeine-free in which blogger tries to avoid a pious essayist style"). Instead I will simply celebrate the anniversary of a good decision in my day to day life.

Are you celebrating any anniversaries of good life style choices?
Posted by Taffi at 3:50 pm 0 comments
Email ThisBlogThis!Share to TwitterShare to FacebookShare to Pinterest

Out with the old year in with the new

Out with the old year in with the new, a new calendar year has flipped over and it is the seasonal taking stock moment. So in a list driven way, that many others are doing too, here are my 2012 blog / 'on the move' highlights...


The highlights all the sweeter for the setbacks that dotted the year (injuries and illness), and more importantly the downs taught me a lot of important lessons that carrying into the New Year will I hope bring even higher running highs this year.

Whatever you did in 2012 I hope that your 2013 surpasses it, and that the New Year brings you everything you wish for.
Posted by Taffi at 9:58 pm 0 comments
Email ThisBlogThis!Share to TwitterShare to FacebookShare to Pinterest