Ten year anniversary - on the move, or not?

Looking back at my blog it would be very easy to be confused as it pro-ports to be about movement and being on the move and so progress, whilst it is clear I haven't really made so very much. I am not, for example, now running sub-4hr marathons, or buzzing a near London marathon good for age PB.  There are cataloged here a number of failed rounds of trying to get 'fit' and pretty much failing at every attempt.

Reflecting on this apparent lack of progress there would appear to be a number of psychological conclusions that could be drawn - for example, sharing a goal taking the place of achieving it, as mentally I have perhaps felt rewarded simply for the process of typing a few posts and putting them 'out there'. Whatever truly is behind it is of course more tricky to define, as most often halts to progress stem from life, or work, or luck, or some such. What is true to say looking at this series of boom and bust endeavours is that the cycles are too short and too sharp, moreover they have settled into swinging around a constant average. Not an average happily that is moving in the wrong direction of unhealthy weight gain (or any other negative indicator), but it certainly isn't moving in the 'right' direction either.

It is fair enough that at the moment most of my times over most distances are still what they were 10 years ago in the face of an ageing chassis (in of itself I suppose a decent outcome of sorts). There is that feeling in me that somewhere the opportunity to run better times was wasted by bad habits and / or poor goal choice.

Am I lamenting and wallowing in self-pity? Well absolutely "yes", but in that lament some truths have become very very clear. The chief amongst these laments being the lack of consistency - the constant cycle swings of flirting with improvement and flirting with my old grossly overweight self. It is perhaps consistency that most people struggle with, we would surely all love to make progress in smooth linear progressions towards fitness goals.
Posted by Andy at 8:15 pm 0 comments
Email ThisBlogThis!Share to TwitterShare to FacebookShare to Pinterest


Whilst writing my last post I found this unpublished... 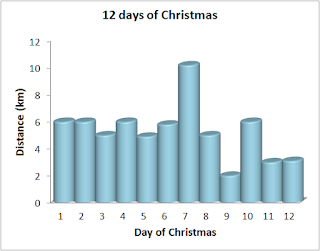 ...this was the streak I had put together before 2016 really got going and put me in a dark place personally and also with my fitness.
Posted by Andy at 1:35 pm 0 comments
Email ThisBlogThis!Share to TwitterShare to FacebookShare to Pinterest

Links to this post Labels: 12days of Christmas, Challenge, Fitness

2016 has not been kind so far, I completed my 12 days challenge around New Year and then tried to get going on half-marathon training. I found initially that my motivation was lacking and then in early February I did something to my back - I don't know exactly what. In the end I struggled on for a couple of weeks and then went to the doctor for an opinion, he ruled out anything other than a back problem and gave me some pain relief and advice to go away with (and the advice to return if there was no change). The result was virtually 8 weeks of nothing, no running, feeling sorry for myself, and getting heavy (not in a good way).

Along the way I had to miss my first go at the Admiral City of Newport half-marathon (Sunday 6th March) which didn't help my mood much. Eventually enough was enough and I just had to get out there and do something as I was desperate to run the Cardiff World Half Marathon Championships mass event this weekend just gone. All I had the opportunity to do was a fitness test to see whether it was even feasible to run, and then give it a go being as cautious as I could talk myself into being.

I was so desperate to run the WHMC event because of the untimely loss of two colleagues since the middle of December. Neither of them were close enough to be friends and I hadn't spoken to one for a couple of years, but the combined effect that they had on my career and the combined effect of their sudden demises left me wanting to do something.... run... run remembering them. I ran for charity in their memory but the money raising wasn't really the driver it was a more raw emotional thing (that I still haven't properly figured out).

After the event, my slowest ever, I feel a bit of the rawness has gone and more happily personally my body hasn't reacted as badly to running on no training as I'd feared. Indeed there have only been a few niggles in my back and 'just' the usual leg soreness. I might have gotten away with my stupid bullish emotional decision to run the thing.

I will try and get back on here some more as I do have other goals to chase this year, I just can't promise when. Hope your running has gone well.

Posted by Andy at 3:56 pm 0 comments
Email ThisBlogThis!Share to TwitterShare to FacebookShare to Pinterest